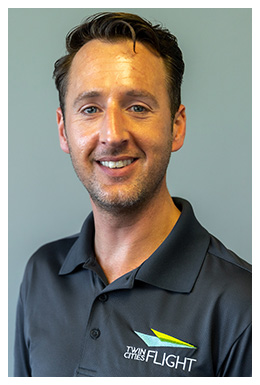 Tim grew up in Linwood, MN, attended the University of Minnesota, and graduated with a bachelor’s degree in Mortuary Science. His introduction to aviation didn’t occur until moving next door to a busy metro area seaplane base. Whether planes were taking off from the water or the grass strip, he always thought, “That looks fun. I’m going to figure out how to do that.” And so, he figured it out.

Tim changed career paths in 2016 after a discovery flight at Twin Cities Flight Training and became a first-generation aviator. He earned his initial flight certifications from Twin Cities Flight and rounded out his training with a seaplane rating. You can find Tim around Twin Cities Flight instructing others to achieve their goals and at the front desk running point for the daily operations. You may also find him pouring a double recommended amount of miracle-gro on his flowers, taking vacations that only involve traveling to an island, or getting those vacuum lines in the carpet just right.