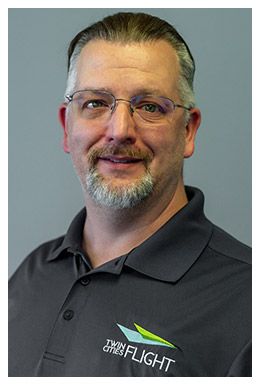 James began flying in 1998 while attending school at St. Cloud State. During his time at St. Cloud, James earned his Commercial Certificate, his Flight Instructor Certificate, and a Bachelor of Science Degree. After college James took a short break from aviation and earned his Master Plumbers License and currently owns his own plumbing company. James joined Twin Cities Flight Training in 2015 and quickly became a go to instructor for the students in Twin Cities Flight’s program. James spends his down time fishing, going to the movies and spending time with his family.