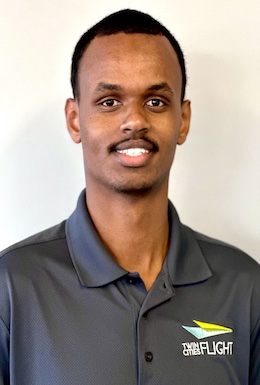 Idiris began flying at a young age. His excitement for aviation began at 6 years old when he took his first flight on the British Airways 747. Ever since then, he has been traveling and visiting many countries around the globe. Idiris has lived in 8 different states and 3 different countries. Most of his flight training was done in Southern California and the Twin Cities. He aspires to be a major airline captain one day. Outside of aviation, Idiris likes to work on his e-commerce business, play basketball, and travel on surf trips. He also loves spending time with his family and friends. Idiris is excited to be on the Twin Cities Flight team and wants to help others fulfill their dreams of becoming a pilot.