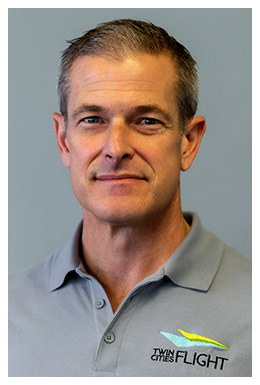 DJ started flying as child with his dad and at 16 earned his Private Pilot Certificate – Glider. DJ grew up in San Diego and spent several years traveling internationally before settling in Minnesota. He has extensive global experience, having flown throughout East Africa and the Middle East, visiting more than 35 countries in all. He has worked for CFR Part 91/91k and 135 operators and holds PIC type ratings in the Citation 650 and 750, Falcon 10, Phenom 300, and Learjet 60. DJ holds FAA ATP, CFI, CFII, MEI, AGI, and IGI certificates, a CAA Commercial validation from South Africa and has served as a training captain on the King Air 200 and the Citation 650. When DJ isn’t flying he enjoys photography and triathlon training.